drjuliadrouhin_at_gmail.com
Dr Julia Drouhin is a French Australian artist and curator based in Tasmania-lutruwita. She explores embodiment of invisible soundstreams that reveal friction in sociality and shift usual modes of transmission through radioscapes, installations and collaborative performances. Her work using field recordings, electromagnetic frequencies as well as textiles, edible and found objects had been presented in Europe, Hong Kong, Brazil, South Africa and Australia, as well as broadcast on terrestrial airwaves and online radios*.

She is the founder, curator and primary performer of “Sweet Tribology”, a touring radio picnic made by 40 female artists in partnership with S.P.A.T.(Sound Preservation Association of Tasmania) which involves creating, listening to and eating chocolate records, presented at RadioRevolten2 Festival (Germany), Motto Gallery (Germany) and MONA (Tasmania) in 2016, and commissioned by LABoral (Spain) in 2015, for which she run a Pozible crowdfunded campaign that received support from Crowbar Arts Tasmania.

She was the recipient of Next Wave’s Emerging Curator Program 2016 with Phillipa Stafford in partnership with Liquid Architecture for Sisters Akousmatica, a 7 hour street radio walking acousmonium with female performers broadcast live in 7 public spaces. Sisters Akousmatica and 3CR were awarded the CBAA Excellence in Music Programming award at the 2017 CBAA Conference.

She co-founded the international Radiophonic Creation Day (100 artists and 56 galleries / radios worldwide ) and Pediluv broadcast for Radio Campus Paris(2008>2011) with Coraline Janvier as well as the French electronic and electroacoustic music Kontact sonoreS festival (2008>2013) with Simon Drouhin and Tania Buisse.
She was the curator of “I Married a Dead Ice-cream”, a radio event with 24 artists who created soundtracks to accompany individualised, flavoured ice-creams to be eaten on a public plaza commissioned by LABoral (Spain) in 2014.
In 2013, she co-curated “Klapperstein”, a 24 hour international sound art headphone festival at the Museum of Old and New Art (Tasmania) in the Barrel Room through “Le Placard” online platform with 40 musicians.
She was a programming associate for Dark Mofo festival 2013 and project manager for the first Pierre Henry's acousmonium concert by distance for Mona Foma festival 2012 from Paris.

She is an associate researcher for L.A.M.U. (Urban Music and Acoustic Laboratory-France), a committee member of the International Radio Art (and Creative Audio for Trans-media) Research Group and WAN (Walking Artists Network) with a Ph.D in aesthetics, sciences and technology about the art of walking and radioscapes in public space (University of Paris 8-France-2011).

She was born in Strasbourg, France in 1983 and lives and works in Tasmania - lutruwita with her husband and 2 kids.


HOME
PROJECT
WORKSHOP
PUBLICATION
RESIDENCY
PRESS
In one episode of the online Tasmanian series “Women of the Island” entitled “The Radiophonic Artist“, filmmaker Rebecca Thomson and an all female production team profiled sound performance artist Julia Drouhin, who makes music with the static from radios and homemade chocolate records that can be played and then be eaten.
https://www.womenoftheisland.com/julia-drouhin/
VISIT HER STUDIO WITH AINSLIE FROM SITUATE LAB ARTS IN FESTIVAL
THESIS ABOUT THE ART OF WALKING AND SOUND ARTS HERE !!!
FRENCH ONLY SORRY <3 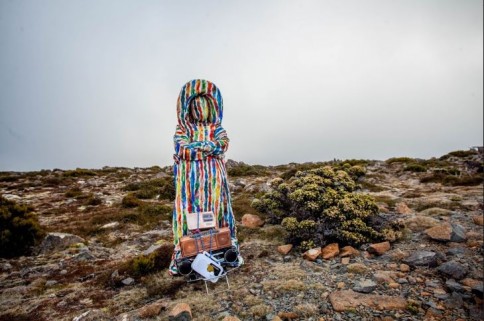 INSPIRATIONS WORKING WITH KIDS FOR ARTELIER